Cecilia's House Is Burning Down

"Cecilia's House is Burning Down" is a Town Event in which the player must attempt to rescue Cecilia (and possibly Robert) from a burning building. 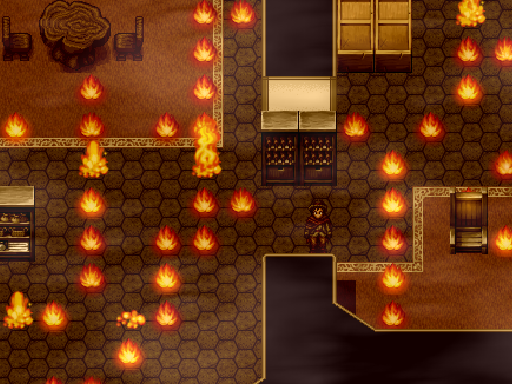 This event is only triggered if the following conditions are met:

Every night that these conditions are met, there is a 1/3 chance "Cecilia's House is Burning Down" will trigger. Once it happens, it cannot happen again.

The player is awoken in the middle of the night (by a villager currently at the inn or, if there are none left, screams from outside). Most of the remaining villagers will be gathered at Cecilia's house. The player will need to enter Cecilia's house, find Cecilia, and bring her back to the exit in five minutes. To rescue Cecilia, the player must go through a maze. The walls of the maze is comprised of individual flames, some of which switch between two positions. These moving flames open and close certain paths to the player, forcing the player towards dead ends.

The placement of the fires is random. When the player reaches Cecilia and picks her up, the player will be slowed down by the weight of carrying another person. The puzzle will also change to another random option, meaning that the player cannot follow the same path back to the entrance.

If Robert is alive, he will enter the house midway through the event. Robert will get lost in the maze, and the player will have the option of saving him.

Each of the following villagers will contribute to putting out the fire; for each that is alive at the start of the event, the player will receive another 30 seconds to complete the maze:

For a total possible extra 3 minutes, or 8 minutes to complete the maze.

Regardless of the player's performance, Cecilia's house is destroyed and becomes uninhabitable. Regardless of whether the player has completed "Light in the Dark," the waypoint into the Dark Cave becomes inaccessible.

If the player manages to save both Robert and Cecilia, Cecilia will go to live with Robert and Gusztav (if he's alive).

If the player saves Cecilia, but Robert either predeceases the event or dies in the fire, Cecilia will live with another villager, in the following order of priority:

If none of the above conditions are met, Cecilia will spend the night in front of the ruins of her house, and will be automatically chosen to die the following night.

If the player fails to save Cecilia during the event, she will be killed immediately.